It was a beautiful day in Chennai. It was nice and cool with a gentle drizzle. After a morning walk with my neighbor, I settled down to “The Hindu”. Depressing news of Naval Data leak, Kashmir pellet blinding and the trump blabbering was beginning to take away the beautiful start of the day until I read about the news on the American consulate people and their families visiting the Kasi Viswanathan Mess at Triplicane.

Decided to go to this place for lunch that day.  Asked my lovely wife, if we could do that and as usual she readily agreed. Asked my children if they also could join, and as expected they said a spontaneous “No”. The, not so fancy name and the fact that it is vegetarian food made them completely disinterested. I normally give in to the children, but today I held on with my desire. Told that I and their mother are going to this place for lunch. Courageous and a Boyish start!!!!!

I googled this place and located it on a narrow lane in the congested Triplicane area and decided to call Uber. Uber, what a fantastic usage of technology!!! One of the best recent developments that has made a common man enjoy the benefits of technology.  Reached the place and the Uber driver said he can’t move beyond a point as the lane was extremely narrow. We got down and enquired and we were simply pointed towards a crowd at a distance. We walked a few meters just to find around 30 to 40 people standing in queue in front of a modest building that was housing the Mess. We joined the queue that was moving slowly. We thought it’s the line where people stand for their turn to get seated. To our utter amusement, we were told that it is just queue to get the token and after that one has to wait to get seated. Our curiosity went up more and after waiting in the line for 15 minutes, we were given white colored tokens with seat numbers printed on it.  People ahead of us were given yellow colored token and few much ahead of us were given some other colored ones.  It was becoming more interesting. 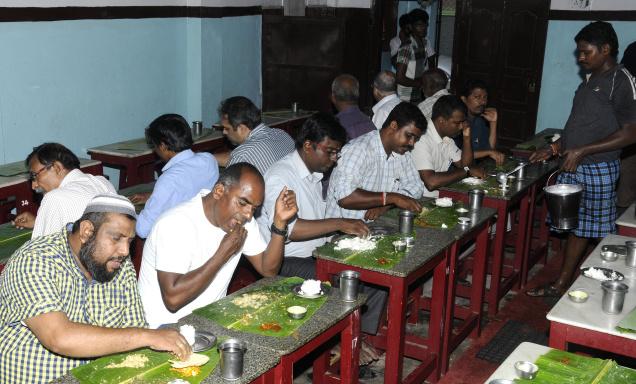 After a while a neat dhoti clad man came out and asked for all the people with Blue Colored tokens to come in. Next went the Yellows and after that we, the white Token people were called in. All this took another 30 minutes. Imagine waiting in a queue for close to 50 minutes just for a lunch.  We got in and were served a simple south Indian lunch on a banana leaf. There was nothing flashy about the food. It was just simple, tasty and limited food. It was a modest place with exactly 48 seats spread in four rows. What made the difference was its simplicity, strict adherence to basics and cleanliness. It just cost us Rs 120 and we were happy to spend Rs.350 on transport. We just took 15 minutes to eat our lunch and we were happy to spend about 65 minutes in queue for this. We shall keep coming to this place.

It was a small and simple thing to do. But it gave  lots of happiness.

Disclaimer:The views expressed in this blog are the writer’s and are not an indication of the company’s view, action or strategy.

Contact us now for a free demo or for more information!

How Google is delivering performance